South Scotland MSP Colin Smyth has questioned the Scottish Government on when powers which will allow councils to directly run bus companies in their area will come into play.

In 2019 the Scottish Parliament passed a new Transport Act that gives councils a range of new powers when it comes to bus services. This will include the right to directly deliver bus services thanks to amendments made to the legislation by South Scotland MSP Colin Smyth lifting the ban on councils running bus routes.

The historic law change secured by the local MSP means councils will soon have the power to run bus services directly or through setting up arms-length municipal bus companies with either model free to compete for any service or franchise.

Colin Smyth questioned Transport Minister Graeme Dey on the subject in the Scottish Parliament on Thursday.

Speaking in the debating chamber, Colin Smyth said: “The minister will know that it is more than two years since I lodged an amendment to the Transport (Scotland) Bill to lift that historical ban on councils directly running bus services or establishing municipal bus companies.

“Can he give us a timescale for when he expects those powers to come into force? Councils want to get on with the job of delivering bus services to their communities. Will the minister also ensure that direct funding is made available to councils to enable them to use those powers, including for capital and revenue start-up costs?”

Colin Smyth continued: “In recent years we have seen the bus network being dismantled route by route, fares have risen and passenger numbers plummeted, because big private bus firms have put profit before passengers.

“These cuts have been felt most by our rural communities but have also affected everyone trying to travel at nights and weekends when there are often no buses running anymore.

“After 35 years of deregulation, the bus network is in decline and strong, empowered local government can transform services for the better.

“The pandemic has exacerbated the fall in passenger numbers and without urgent action there is no doubt that the network across Dumfries and Galloway will collapse when the current Covid related support ends.

“I am pleased that the changes I proposed in the Transport Act are now moving forward but it’s vital that the Scottish Government get on with giving councils the power and resources as soon as possible to set up and run their own services.” 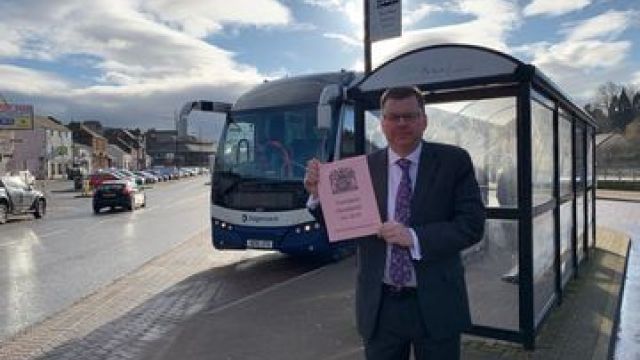